1 reply to this topic

CRISPR, a revolutionary technology that can edit genetic mistakes, is getting attention and scrutiny. It could help get rid of diseases like cystic fibrosis, muscular dystrophy and even HIV and cancer. But many scientists, including Jennifer Doudna, who is credited with developing the gene-editing technology, are calling for a moratorium on its use.

Doudna, a researcher and professor at University of California, Berkeley, has become a spokesperson for CRISPR, which stands for clustered regularly interspaced short palindromic repeats. Doudna said a great analogy to what the CRISPR does would be a film editor.

"Think about a film strip," Doudna told "CBS This Morning" co-host Norah O'Donnell. "You see a particular segment of the film that you want to replace. And if you had a film splicer, you would go in and literally cut it out and piece it back together -- maybe with a new clip."

"Imagine being able to do that in the genetic code, the code of life," Doudna added. "You could go in and...snip out a piece and replace it with something that corrects a mutation that would cause disease." 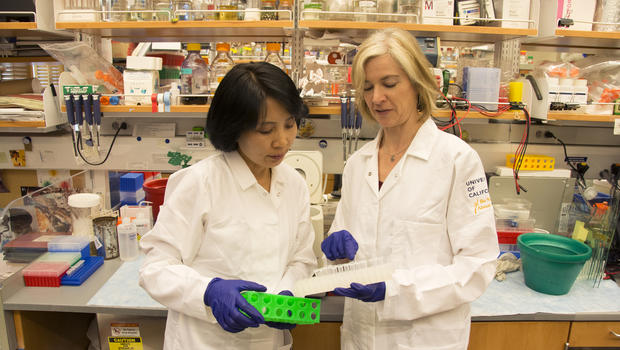 CRISPR has generated immense excitement because it's fast, cheap and can cut and paste genetic code with great precision. It used to take months or years to alter a single gene, but now, that can be done in a matter of days.

"Could it end cancer?" O'Donnell asked.

"What I'm excited about there is the potential to use the CRISPR technology to program a patient's immune system to recognize tumor cells in a precise way," Doudna said.

While she's not sure if the technology could help cure virtually any disease, Doudna said any disease that has a genetic basis could be treated using CRISPR technology. 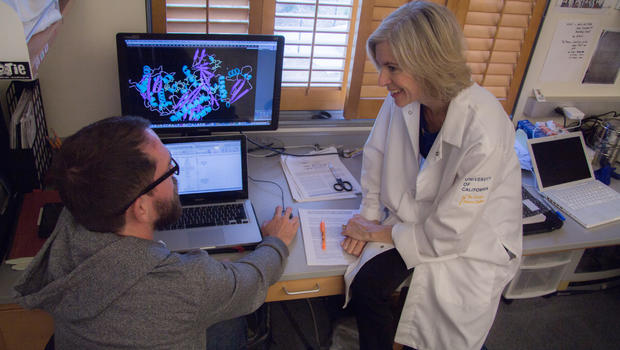 Doudna said we could expect to see clinical applications of CRISPR within the next few years, but alongside CRISPR's promise come some fears of its perils, like embryo-editing, which could lead to designer babies and changes to embryos that are permanent.

"We're talking about something that would affect human evolution," Doudna said.

"You could have an instance where a lab is creating lots of human embryos just for the sake of experimenting on genome editing on them, right?" O'Donnell asked.

"If you're asking me, could that be done technically, the answer is it could, right? Could it be done...with current regulations in place? Certainly not in the U.S., no," Doudna said, adding that it would be restricted in Europe as well.

"Science is global, and there are different cultural viewpoints on that kind of application," Doudna said.

In April, Chinese scientists reported using CRISPR to edit the diseased genomes of human embryos for the first time. The experiment was a failure, but it sparked concerns worldwide. Doudna has long been vocal about the need to set ethical boundaries and is convening an international summit on the subject Tuesday in Washington, D.C.

"I think it would be great if we can at least get on the table...the key issues," Doudna said. "It's hard to imagine that there would be a consensus by all of the parties at the table about how to proceed, but I do think that the first step is really to have that kind of open conversation."

As many questions as there are about how to safely use CRISPR, there are still more about who legally owns it. You can't read about Doudna without reading about a patent dispute between her and Dr. Feng Zhang at MIT.

"How would you describe that back and forth between the two of you?" O'Donnell asked.

"Non-existent. You know, I think both of us are scientists," Doudna said. "I leave patent disputes to the people that make the big bucks."

"But royalties for this technology could be worth billions of dollars," O'Donnell pointed out.

"Well, again, I try to stay focused on what's important to me, which is the use of this to really treat human disease and to cure other...problems in human society," Doudna said.

The high hopes and high stakes associated with CRISPR have catapulted Doudna into a rare stratum of scientific celebrity. Last year she and her research partner received the $3 million Breakthrough Prize in Life Sciences, which seems to be only the beginning.

Her name has been floated repeatedly for the winner of the Nobel Prize in science. Doudna said she is "incredibly honored and kind of shocked" to see that but she doesn't think much about it.

She said she was also completely surprised when Time magazine named her one of the 100 most influential people.

Good article. i think we are moving closer to cancer treatment. It will be the biggest gift to mankind from somebody who will be able to secure a treatment. God bless you researchers...

Reply to this topic

Also tagged with one or more of these keywords: Cancer

0 user(s) are reading this topic